What is most striking about child homicide are the very high rates during the first few months of life and that the offender is the mother of the child. Figure 1 shows rates by age of children from birth to age 18. Two data sources were used from 1996 to 2000: state homicide rates from California and national rates from the FBI.

Figure 1 shows that homicide rates among newborns are the second highest in the 18-year lifespan. The newborn rate is not exceeded until about age 15 in California and about age 16 nationally. What is also 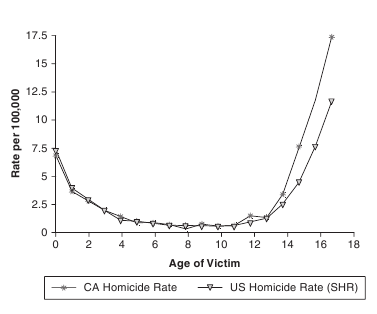 noteworthy is that the homicide rates in Figure 1 drop sharply and remain low between age 6 and age 12; this period has the lowest homicide rates in the human lifespan and reflect the high level of surveillance of children during that period by parents, schools, and other agencies.

Figure 2 gives the rates adjusted by age for Black, White, and Hispanic children in California from 1987 through 2002.

As Figure 2 indicates, the curves for race and ethnic groups follow the same general form as Figure 1. However, the rates for Black victims are much higher in the first few years of life compared to Whites and Hispanics. One research study found the relative risk for Black infant homicides was over 3 times higher than for Whites. There are two lines of reasoning that suggests the high rates among Blacks reflect social and economic hardships frequently of a single parent unprepared for child raising.

First, the evidence is generally clear that there is little distinction among genders in the killing of infants; both male and female infants are killed at about the same rates. Second, Hispanic rates are low because research indicates fewer homes with Hispanic fathers absent—even among immigrants. This difference suggests social and economic factors are operative. 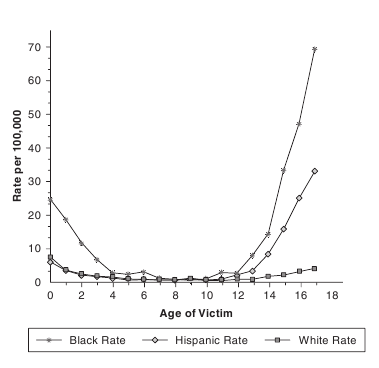 The available research suggests that over 90% of homicides during the first week of life are committed by the mother. Thereafter, fathers, other family members, and people outside the family gradually play a more important role as offenders.

There seem to be two general classes of causes of maternal homicide. There are a number of maternal homicides occurring among young women who become unexpectedly pregnant. The case of the “prom mom” in New Jersey, who concealed her pregnancy until she delivered the child in the toilet at her senior prom, killed it, wrapped in trash bags, threw it in the dumpster, and returned to the prom.

Young women who fall in the category of the unexpectedly pregnant go to great lengths to conceal their pregnancy. The expectant mother is fearful and concerned about what her parents and friends will think; overwhelmed by guilt and shame, she denies the pregnancy until she is faced with the newborn child. Such cases may be the result of dissociative disorders; the latter are an inability to recall important information, usually of a traumatic or stressful nature. Confronted with the undeniable fact of a newborn infant, rather than acknowledging what happened, she disposes of the baby as quickly as possible.

Second, although the latter explains a limited number of neonaticides, a more frequent reason is that the mother either does not know or is not prepared to take care of a newborn child. A study of over 34 million death certificates found that half the homicides by the mother occurred by the fourth month. Important risk factors were a second or subsequent infant born to a mother less than 17 years old, no prenatal care, and less than 12 years of education.

This example Maternal Homicide Essay is published for educational and informational purposes only. If you need a custom essay or research paper on this topic please use our writing services. EssayEmpire.com offers reliable custom essay writing services that can help you to receive high grades and impress your professors with the quality of each essay or research paper you hand in.