A phobia, or phobic disorder, is an irrational or excessive fear of a particular object or situation. The DSM-IV lists three varieties of phobic disorder: social phobia, speciﬁc phobias, and agoraphobia, all of which are classiﬁed as anxiety disorders. People with social phobia have intense fears of social interactions, such as meeting others, dating, or public speaking. People with agoraphobia (literally “fear of the marketplace”) fear venturing out into open spaces or going out in public. Speciﬁc phobias, the kind most people associate with the term, are fears of speciﬁc situations or objects. Phobias affect people of all ages, from all walks of life, and in every part of the country. The National Institutes of Mental Health report that 5.1 to 12.5 percent of Americans have phobias. They are the most common psychiatric illness among women of all ages and are the second most common among men older than twenty-ﬁve.

Phobias are manifested as emotional and physical reactions that can interfere with going about a daily routine. Symptoms include feelings of panic and dread, rapid heartbeat, shortness of breath, trembling, and an overwhelming desire to ﬂee the situation. Fear of this reaction leads to avoidance of the feared situation or object, which can interfere with the ability to work, socialize, or care for one’s personal needs.

People with agoraphobia avoid public places, especially busy streets or crowded places such as theatres, shopping malls, or churches. Some people with agoraphobia become so fearful that they remain housebound, leaving their homes only with great distress or when accompanied by a trusted friend or family member. Two-thirds of those with agoraphobia are women, and most develop the disorder as a result of suffering from one or more spontaneous panic attacks. Thus the prognosis for panic disorders often includes the development of agoraphobia. These sudden attacks of fear and physical discomfort seem to occur without warning, making it impossible for a person to predict what situation will trigger such a reaction. This unpredictability causes individuals to fear entering any situation in which such an attack might occur, as it seems that another attack may occur at any time. Symptoms usually develop between the ages of eighteen and thirty-ﬁve.

A person with social phobia fears being humiliated while doing something in public, and she or he will avoid any situation in which such activity may be required. The most common manifestation of social phobia involves public speaking, but the feared activity may be something as ordinary as signing a check, eating in a restaurant, or talking to a customer service representative on the telephone. An affected person with the generalized form of social phobia fears, and therefore avoids, interpersonal interaction in general. This is disabling, as it makes going to work or school, or indeed socializing, all but impossible. Social phobias are common in both men and women, and generally develop after puberty and peak after the age of thirty.

Unlike many other psychological disorders, phobias are very easy to treat, and most people who seek treatment completely overcome their fears for life. The most popular treatment involves systematic desensitization, a type of behavior therapy. This treatment is based on the idea that phobias are created by a process of respondent conditioning and can be eliminated by creating a new response to the stimulus that elicits the fear. The idea is simple: the body’s ﬁght-or-ﬂight response, which is the source of the physical sensations and dread associated with the phobia, is incompatible with a state of total relaxation, and so teaching a person to relax in the presence of the feared object or situation eliminates the fear reaction by replacing it. The ﬁrst step in systematic desensitization is therefore teaching the patient to relax. This usually involves a series of training sessions on progressive relaxation, in which the patient learns to relax his or her entire body on demand. Once this skill is mastered, the desensitization sessions can begin. These involve presenting a series of non-threatening situations that progressively begin to approximate the feared situation more and more closely.

Table 5. A Selection of Speciﬁc Phobias 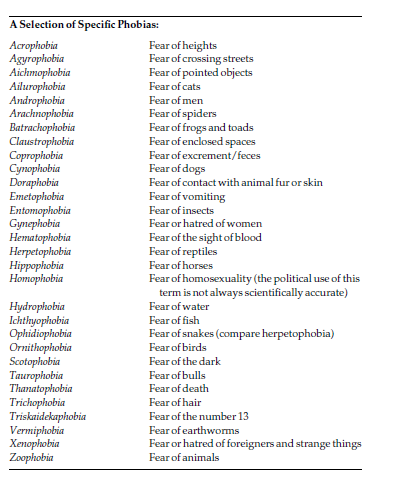 Consider, for example, the treatment used for Megan, a young woman with a fear of dogs. After she has learned the relaxation response, the therapist introduces a series of photographs of dogs. As she sees each one, she is cued to relax. When she is consistently able to relax in the presence of the photos, the recorded sound of barking on tape is added. When she can consistently relax in the presence of the photos and barking, a real dog is introduced into the room, but is kept in a cage across the room. When she can consistently relax in the caged dog’s presence, the dog is brought closer but kept on a leash. Eventually, she will be able to relax fully while touching the dog, and her fear is therefore gone. By confronting the object of fear in this way rather than ﬂeeing, the person becomes accustomed to it and no longer feels panic and dread in its presence.

A more controversial treatment for phobias, ﬂooding, would dispense with the gradual nature of systematic desensitization by instead helping Megan get over her fear by immediately placing her in a room with one or more dogs and requiring that she stay there, and hopefully come to understand that there is no danger. The relaxation component of systematic desensitization is also sometimes replaced by a shortcut: antianxiety drugs are used to cause the person to relax in the presence of the feared object or situation. Such medications are also the favored treatment for social phobia and agoraphobia (see also Paraphilias).

This example Phobias Essay is published for educational and informational purposes only. If you need a custom essay or research paper on this topic please use our writing services. EssayEmpire.com offers reliable custom essay writing services that can help you to receive high grades and impress your professors with the quality of each essay or research paper you hand in.